Donald Trump recently posted a Game of Thrones-style meme on Twitter that included reference to the sanctions against Iran that are set to take effect. The tweet created a stir on social media and generated much reaction. HBO, the show’s producer, stated that “[we] would prefer our trademark not be misappropriated for political purposes”. For the most part, memes are created by individuals and are a form of cultural discourse for sharing opinions and ideas; at times memes are used for commercial reasons. The phenomenon, which has become commonplace in mass internet culture, raises an important legal question: Does using another’s work with added text constitute copyright infringement?

Israel’s Copyright Act states that another’s work cannot be used without first receiving permission from the owner of the rights to it. The law also states that authors have a moral right to their work, such that they are entitled to their work not being distorted and to no derogatory act prejudicial to their honor or reputation being carried out with respect to said work.

From the law’s standpoint, these memes may be considered a derivative work, a work based on another’s original work; however, it is the owner of the rights in the original work who in principle may create it or permit its creation. At the same time, there is the protection of fair use, which is permitted use of another’s work without the author’s consent and without payment of consideration for the purposes of private study, research, criticism, journalistic reporting and quotations. Fairness of use is examined by taking into account factors such as the purpose and nature of the use, whether it is private or commercial use, the nature of the work, the extent of use, its impact on the work’s potential market, and others, (without going into the question of a person’s right to privacy insofar as such memes include a person’s picture).

So where do memes fit in? Is anyone who publishes a meme on another’s work infringing copyrights and subject to legal action? A ruling has not yet been issued on the topic in Israel, but some suits have already been filed around the world and the phenomenon has been discussed on various internet forums, an indication of its becoming more widespread and its implications.

For example, in 2014 Meagan Simmons filed suit following her picture which became known as the ‘attractive convict’ being used without permission, a picture which was taken after she was arrested for driving under the influence and which went viral. The suit was filed against a security firm that used the picture commercially and wrote that “Sometimes the cute ones aren’t so innocent.” 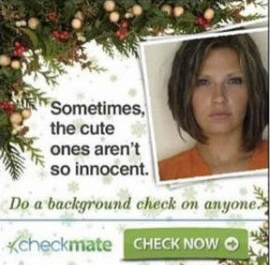 Simmons alleged invasion of privacy and copyright infringement since her picture was used for commercial purposes without her permission and without compensating her. The suit was ultimately dismissed with each party bearing its own expenses; and according to media reports, the parties apparently reached an agreement on the matter outside of court.

Another famous meme is “Hitler gets angry”, which comes from a scene in the German movie Downfall, where Hitler flies into a fit of rage once he comes to understand that the war is lost. It became widespread and a parody, with risible subtitles when uploaded to YouTube. The sensation also hit Israel; and although Oliver Hirschbiegel, the film’s director, lavished praise on these parodies, the movie’s distributor requested YouTube to take down all such parodies, claiming copyright infringement. Following its request, some of the videos were removed or blocked.

Another case is the famous picture taken by Antonio Guillem known as the “distracted boyfriend”, which captures a young man strolling down a street with his girlfriend and checking out some other girl in amazement, to his girlfriend’s dismay. The photographer claims that he is not concerned with the memes themselves when used on social media in good faith, but that he is ready to take legal action when the picture is used as a meme which could harm him or those photographed in this picture. 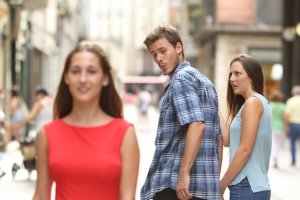 Memes are often used for humor or sarcasm; and so long as their use is not commercial, it can be argued that this is fair use which does not constitute copyright infringement, due to the nature of the use, its scope and the lack of its impact on the work’s potential market, all of which are subject to the specific circumstances of such use. However, commercial use of these memes might be considered an act of copyright infringement since this is a work based on another’s original work, where its use affects the original work’s potential market and does not encourage other important values such as expressive or creative freedom.