The Israeli government reacts to the COVID-19 pandemic by issuing two State of Emergency Regulations, imposing sweeping digital surveillance; the Supreme Court put them on halt.

According to the WHO’s data, as at March 21, COVID-19 Already affected almost 200 countries, more than 200,000 people were diagnosed as infected and almost 10,000 people died. If left untreated, the number of infected people will grow exponentially.

Following is the graph depicting the total number of diagnosed COVID-19 patient per day in Israel:

Admittedly, when growth rate is viewed as a percentage, the visual graph may look better than global average (but it is not possible to make reliable comparison, owing to, differences in testing criteria and diagnosis criteria):

Each country fashioned its own measures to fight this pandemic. Probably the most consensual measure is social distancing. This is a key feature in the plan of action of the government of Israel as well. But how does one achieve social distancing? The rules are relatively clear. Every person returning from abroad must report to the authorities (by an online tool) and enter quarantine for 14 days. Every person who was in contact with a diseased person must also enter such quarantine. This includes not only people who know for a fact that they were in contact with a diseased person, but also people who were in the vicinity of a diseased person.

This begs the question how does one know that she or he was in the vicinity of a diseased person? During the beginning of the outbreak, The Ministry of Health interviewed diseased persons and published detailed itinerary of their movement during recent days (see examples here), urging the public the study such itinerary and voluntarily enter quarantine if found to spend time together with infected at the same location.

The First Regulation enlisted the Israeli Secret Service to this effort. These regulations allow the Secret Service to receive, gather and process “technological information” (excluding the contents of the conversation), for the purpose of ascertaining the location data and the movement trail of a COVID-19 diseased person during the 14 days preceding such person’s diagnosis and for the purpose of identification of people who were in contact with him, and to hand over such information to the Ministry of Health. This means that the digital footprints of every diseased person will be studied and analyze and the Secret Service would be able to identify every person who was in closed vicinity of an diseased during the preceding 14 days, based on the digital footprints of the latter. This information will then be handed over for the Ministry of Health who will take over. presumably the Ministry of Health will notify those identified and require them to enter quarantine.

The second Regulation authorizes an officer of the Israeli police to obtain location data from telephone (landline or cellular) service providers, without a court order, for two purposes. One purpose is to allow the police to verify that a person adheres to his quarantine restrictions. The second purpose is to verify the location of the diseased person in order to warn the public and in order to prevent or reduce the spread of the disease.

For now, these two State of Emergency Regulations were to remain force for two weeks, namely until the 30th of March 2020.

It is perhaps telling that the origin of the aphorism “Hippocrates” is attributed to Hippocrates[2]. It is without doubt that these regulations encroach heavily on to the right of privacy. It is also without doubt that the right of privacy is not absolute and sometimes must yield to paramount interest. But Due process and the rule of Law do not vanish in times of crisis. Admittedly, a State of Emergency requires some laxing. At the same time human rights are most vulnerable in a state of emergency.  The Regulations already provide for some safeguards.

These are set forth in the below table: 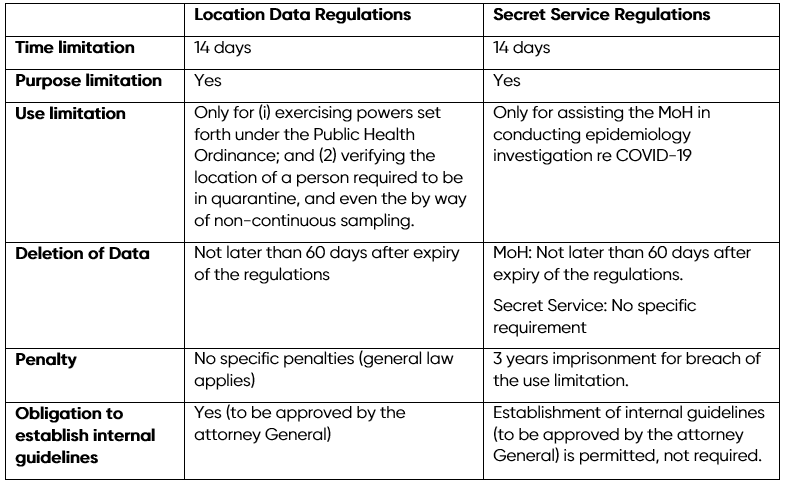 However, other safeguards are missing. Leaving all other issues to non-transparent internal guidelines is problematic. The lack of any parliament control is also very troubling. It is therefore of no surprise that petitions to Israel’s Supreme Court (sitting as a High Court of Justice) followed.

Three petitions were filed with the Supreme Court challenging the legality of the regulations. the petitions were heard on 19th of March And an interim decision followed that day.

The Supreme court’s order prohibits the implementation of the Police-GPS Regulations until further notice. As regards the Secret Service regulations, the court ordered that unless the Knesset (Israeli parliament) establishes by 24th March 2020 parliamentary committees that will conduct parliamentary oversight of these regulations , it will no longer be possible to make any use of the powers granted by the regulations. In addition, from now on the Secret Service regulations will be implemented only for the purpose of locating those who were close vicinity with diseased persons with confirmed laboratory findings of COVID-19.

The Court ordered supplemental briefs which should address the following issues:

A final judgement is yet to be issued.

[1] The government may issue State of Emergency regulations, without parliamentary control Under certain highly limited terms.

[2] “For extreme diseases, extreme methods of cure, as to restriction, are most suitable“. See here.