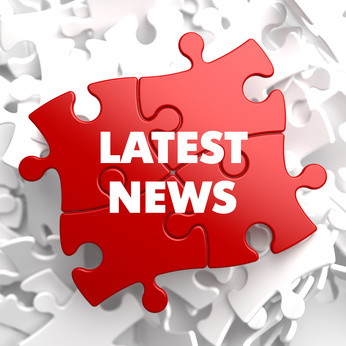 The Israeli Patents Law provides for pre-grant oppositions allowing any third party to oppose patent applications after their allowance is published by the ILPO.[2] If an opposition is filed, the patent will not be granted until the opposition is finally resolved.

As was noted in the report, that the background and rationale of the study included (a) the amendment of the Israeli Patent Law in 2012 [this amendment mainly dealt with the early publication of patent applications][3], (b) legislative changes of Israel (particularly the US and Japan), (c) a very low rate of oppositions, and (d) a general feeling that the pre-grant opposition proceedings are not efficient.

The main conclusions drawn from the study, as well ours, is as follows:

I. The rate of pre-grant oppositions filed was found to be as low as 1%

The ILPO found that for those cases studied (from 2013 to 2015) about 1% of the total number of allowed patent applications were opposed.

The ILPO consequently concluded that pre-grant oppositions are actually not utilized by third parties to challenge patent applications.[6]

We conducted further analysis of the number of oppositions filed out of the total amount of allowed applications also from 2000 through 2012 (published in the ILPO’s annual reports).[7]

The graph below represents the number of oppositions filed out of the total amount of allowed applications from 2000 through 2015: 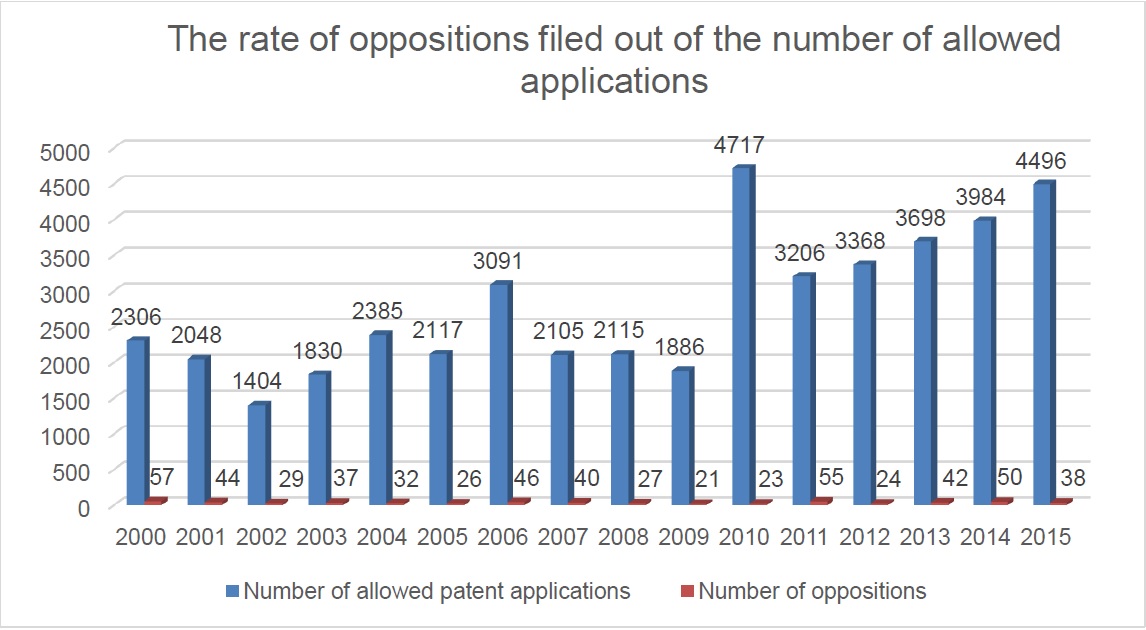 As arises from the second below, there has been a general decrease in the rate of oppositions filed against patent applications since 2000, which can also substantiate the ILPO’s conclusion relating to the (lack of) use of oppositions by third parties over the last few years. 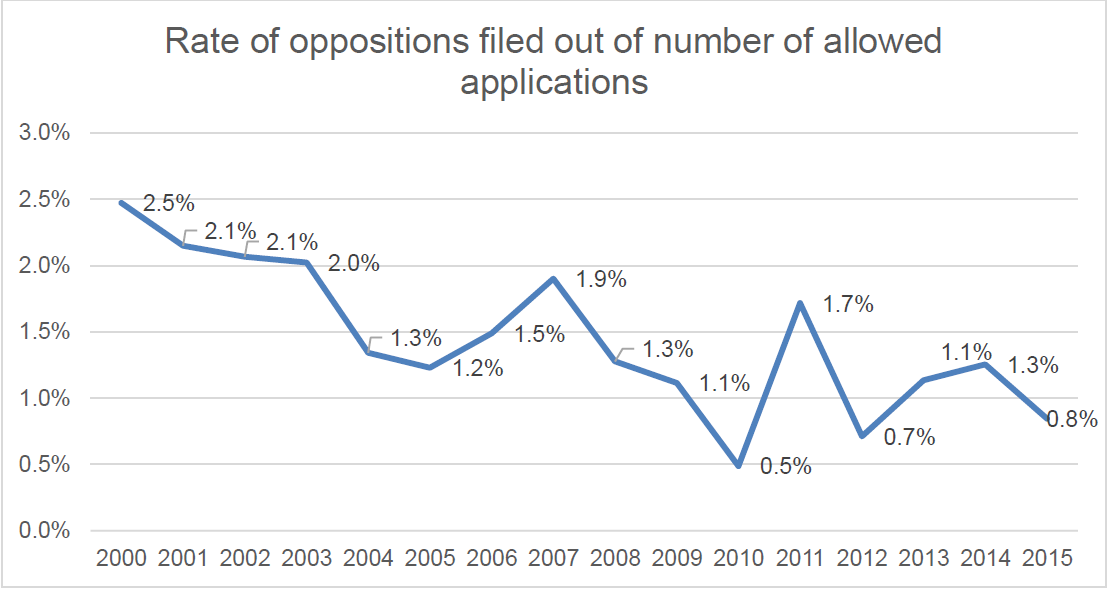 II. The duration of pre-grant opposition proceedings was found to be exceptionally long

The ILPO found that the duration (time lapsed from filing of the opposition until the file is closed) of those (few) oppositions litigated until a final decision in the opposition is issued[8] is around six years.

The ILPO consequently concluded that the duration of oppositions in Israel is exceptionally long, particularly when compared to corresponding proceedings in Europe and in the US.

We note that since the patent is not granted in Israel until a final decision in the opposition is issued (and if an appeal is filed, until the decision in the appeal is issued), there is a very long delay in the grant of patents, which limits the patentee from enforcing its rights during this long period.

The delay resulting from the prosecution period of a patent application[9] is around five to six years.[10]

Thus, the cumulative delay in the patent’s grant could be a decade or more[11], which is more (sometimes substantially more) than half the lifetime of the patent.

Under these circumstances, the system could be abused by opponents in order to cause intentional delay in the grant of a patent.

III. The majority of the oppositions are abandoned

The main outcomes of the cases analyzed in the ILPO study are represented in the graph below.

As arises from the graph, oppositions were abandoned by the opponents in the majority of cases (61%).

In addition, only 9% of the oppositions are heard in full (until judgement by the ILPO). 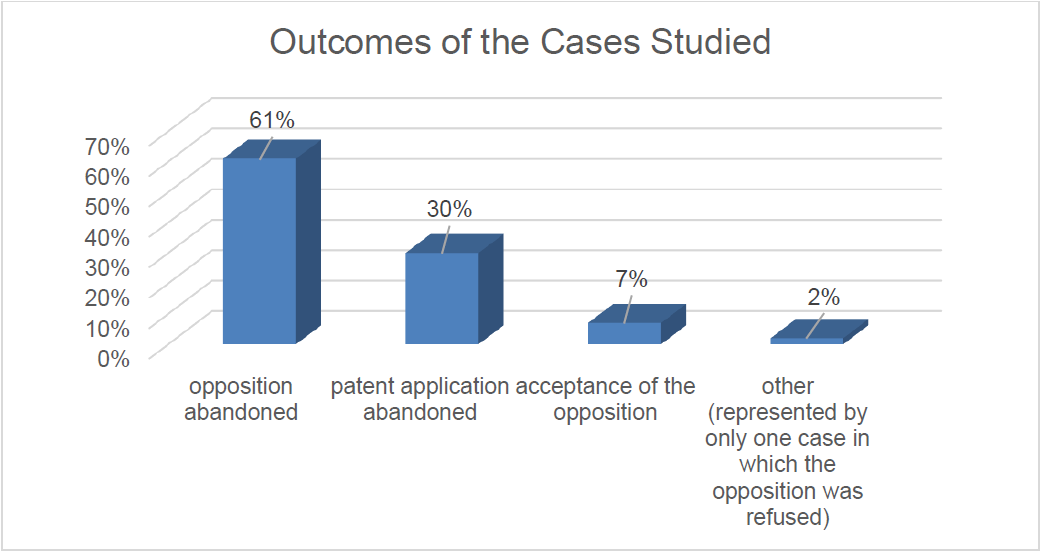 The ILPO found that 85% of the oppositions that end by abandonment (the opposition or the patent application, as the case may be) end before the evidentiary stage. In addition, in about 40-50% of those proceedings, abandonment occurs even before any pleading is filed.[12]

These results suggest that since a very low amount of oppositions are filed and most of these oppositions are abandoned, the usefulness of the pre-grant opposition system should be revisited, as it may not prove to be a useful tool.

IV. The fields of the patent applications for which oppositions were filed

The ILPO found that around 50% of the opposed patent applications are in the fields of pharmaceuticals, biology or chemistry, around 40% in the field of mechanics, electronics and optics and only 12% in the field of computers and communications.

We conducted further analysis of the fields of the patent applications for which oppositions were filed from 2004 through 2014 from the data published by the ILPO in the annual report for 2014.[13]  As arises from the table below, in the last decade a significant percentage of opposed  patent applications are in the field of pharma, chemistry and biology. 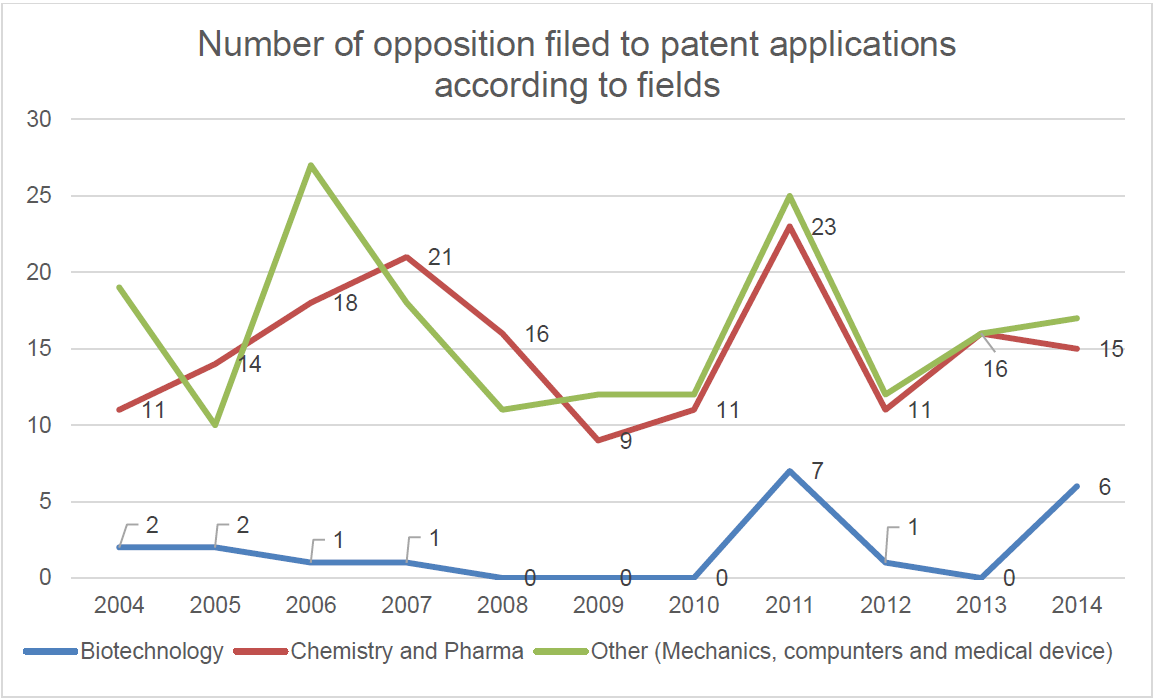 The ILPO found that oppositions in the pharma field are dominated by only two main opponents, namely, Teva (56%) and Unipharm, a local generic company (42%), which are together responsible for 98% of the oppositions in this field.

It is well worth noting that motions to amend the specification were filed in only around 30% (38 cases) of the cases studied. However, around 50% of these opposition cases were ultimately closed due to the amendment.

These results suggest that filing oppositions might not necessarily be a trigger to amendment of the patent specification; however, doing so can be found to be a useful tool to obviate the opposition proceeding in an efficient and cost-effective manner.

* All information relating to the ILPO study, referred to in this newsletter, is based on data available at: https://www.justice.gov.il/Units/RashamHaptentim/Pages/Nemala.aspx

[2] It is of note, also, that the Patent Law enables the filing of a motion of revocation of patents throughout the patents’ life.

[4] We note that the methodology of the study could have limitations as to whether further conclusions that can be drawn from it.

[6] The rate of oppositions in Europe in the last couple of years is around 5%; see EPO 2015 Annual Report (https://www.epo.org/about-us/annual-reports-statistics/annual-report/2015/statistics/searches.html#tab1).

[9] The average time lapsed from filing of the patent application until the application is allowed.